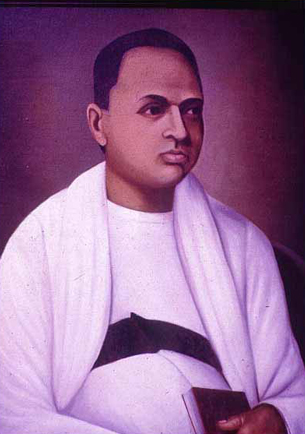 Rev. George Mathen was the first Indian priest of the Anglican Church, in this area. On taking up his station, he threw himself wholeheartedly into striving for the upliftment of the downtrodden and lesser fortunate in the community.

A scholar in Malayalam, Rev. George Mathen made a signal contribution to his mother tongue by scripting the first-ever grammar book for the language,. A noted historian as well, his accounts of society as it was then is still respected by students of history. His letters and other communication with the headquarters of the Church Missionary Society in London in the 1850-1860 period have now been compiled under the title “Occasional Journals and Letters”. These are now lodged at the CMS Archives and form a rich source of historical material for researchers.

Rev. George Mathen also wrote a new chapter in the annals of Christian history in India by baptizing Habel, a Dalit (person from the lower caste) to the Church for the first time. Habel’s entry to the Anglican Church marked the beginning of a mass movement of Dalits into Christianity. It was also a landmark in the social history of Kerala, inaugurating diverse socio-cultural processes for change in the status of the most exploited group.

Known as the “Mallappallil Achen” (Priest of Mallappally), Rev. George Mathen’s life and work had a unique quality of its own that inspired generations that followed him. As a model clergyman, social reformer and scholar, he stands high as a legendary figure in the history of Kerala’s march to modernity.

Rev. George Mathen was and is an inspiration for the people here; his concern for the poor and dreams of development was a prompt to establish a hospital. Hence it was only fitting that the hospital was named the Rev. George Mathen Mission Hospital.